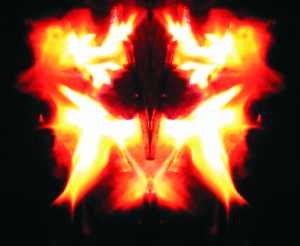 We’re setting butterflies on fire,
the ghost of a long lost
childhood friend and I.

Our fingers are phosphorescent and sad,
like matchsticks before the spark.
So much for things of the past.

I look at her smile,
cold white flame
flickering.

On her shoulder, an abstract
of a bird from the last
gasp of a dream

Before waking.
The windows rattle,
not knowing how she

Could have gotten through them
in the middle of the night.
The scent of burnt wings

Are trapped in the curtains.
What will Mother say
when she smells her ghost

In the secret pockets
of my dirty clothes?
Ssshhh…

This poem was written around 1992 and first appeared in Salimbayan, a collection I shared with three good friends back from university, Neal Imperial and Argee Guevarra.   The book was published in 1994 and is currently out of print.  One day we might get together and work on a revised version.

This currently appears on Helium.

Jim Pascual Agustin writes and translates poetry. Sometimes he tries his hand at essays and stories. In 2011 the University of Santo Tomas Publishing House in Manila released BAHA-BAHAGDANG KARUPUKAN (poems in Filipino) and ALIEN TO ANY SKIN (poems in English). The same publisher released his most recent poetry collections SOUND BEFORE WATER and KALMOT NG PUSA SA TAGILIRAN. In 2015 a new poetry collection in English, A THOUSAND EYES was released. His first collection of short stories in Filipino, SANGA SA BASANG LUPA, was released in 2016. UK publisher The Onslaught Press launches his latest poetry collection, WINGS OF SMOKE, worldwide in February 2017. END_OF_DOCUMENT_TOKEN_TO_BE_REPLACED
This entry was posted on Monday, February 2nd, 2009 at 08:51 and tagged with Argee Guevarra, butterflies, childood dreams, memory, Neal Imperial, poetry, Publikasyong Sipat, remembering, Salimbayan, surreal and posted in Mga Tula / Poetry, poetry. You can follow any responses to this entry through the RSS 2.0 feed.
« Voices, Borders and Border Crossers
Trapped Guinea Fowl Chicks »