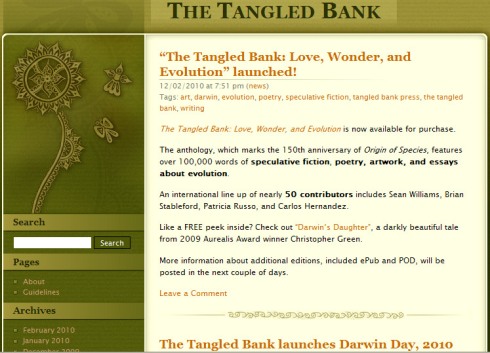 The Tangled Bank finally launches!  Congratulations Chris Lynch!  And thanks for including my poem “Creatures of Lava Tubes” in your unique anthology.  May your tribe flourish!  And make some good sales so we lowly contributors get a few cents rain on us.  🙂

The recent headlines regarding some suspicious activities by a religous group from the US (alleged kidnapping of Haitian children, just to spell it out) is overshadowing a darker deed.  Read John Pilger’s analysis:

The Kidnapping of Haiti from The New Statesman

The theft of Haiti has been swift and crude. On 22 January, the United States secured “formal approval” from the United Nations to take over all air and sea ports in Haiti, and to “secure” roads. No Haitian signed the agreement, which has no basis in law. Power rules in a US naval blockade and the arrival of 13,000 marines, special forces, spooks and mercenaries, none with humanitarian relief training.

The airport in the capital, Port-au-Prince, is now a US military base and relief flights have been rerouted to the Dominican Republic. All flights stopped for three hours for the arrival of Hillary Clinton. Critically injured Haitians waited unaided as 800 American residents in Haiti were fed, watered and evacuated. Six days passed before the US air force dropped bottled water to people suffering dehydration.

Read the rest of the article.

Who would have thought that an earthquake alone is not tragic enough?

Off the Beaten Track Launch

Sounds like they had a nice ride during the launch of Off the Beaten Track: Tulaan sa Tren 2, judging by Alfred A. Yuson’s account:

The prizes were first awarded for the Tulaan sa Tren 2 poetry contest run last year by the National Book Development Board.

Then we boarded the train, from the LRT-2 Santolan depot all the way to the other end stop, which was the Recto Avenue station past Quezon Blvd. Along the way, we marveled at the markedly different view of Metro Manila, at treetop level and beyond, from greenscapes and ritzy corners with modern buildings to the unavoidable rooftop patchwork of congested neighborhoods, littered empty lots and ugly dump sites.

Along the course, too, we had the privilege of standing and sashaying up and down the spacious, fresh carriages, and reading poetry up close — on horizontal posters prominently displayed above the windows. The poems also came off the sound system that pervaded the coaches and the spanking-clean stations whenever we stopped.

Thus, reality, hyper-reality and the Pinoy poetic sensibility as lyricized in two languages converged in pure delight on this rare treat of a Saturday afternoon rapid-transit ride, taking barely an hour from Marikina to Manila and back. Quite an experience.

And when our mass-transit troupe got back to the depot, what welcomed us apart from a buffet table of goodies and iced drinks was the launching of Off the Beaten Track: Poems from Tulaan sa Tren 2 — a cute, squarish, full-color edition in glossy paper that collected over 50 poems and as many poets contemplating passages physical and metaphysical.

READ THE REST OF THE ARTICLE

Link to my previous post on Off the Beaten Track: Tulaan sa Tren 2