I never gave much thought about borders and national identities twenty years ago. It seemed pretty clear to me back then that where you were born defined who you are and how you viewed the rest of the world. It was a simple way of identifying who was “the enemy” and who was on your side. It was narrow-minded and simply wrong.

Now I see that the concept of nationality can and has been used by those in power to turn us into pawns against each other. It is no more than an idea that is easy to throw around because it is in our nature to recognize and accept more readily what is around us as the norm, and that what is outside of that limited experience is something to be wary of.

Yesterday I heard that dreaded word again in a news report: xenophobia. That discussion will have to wait another day. For now I would like to share some news.

I intend to share a number of poems over the course of this month (March 2014) as my way of celebrating the books that have been generously put out by various publishers through the years. Some days I may provide links to poetry published online and other days I will just post the poems here. I have my own personal reason for this. Maybe I’ll explain that at the end of the month.

The first installment comes out today. It is from an e-zine that features poetry from the “Filipino diaspora” – a concept which to me feels like a cousin of “nationality” to a certain extent. I am and I am not. The grains of sand between my toes do not have passports…

The poetry e-zine Our Own Voice has featured my work a second time. Four of the seven poems are from Sound Before Water, one (with an English translation) from Kalmot ng Pusa sa Tagiliran, and the last two are from manuscripts in progress. (NOTE: as of this writing there is a layout problem with the first poem, “Air from Another Moment,” which I hope could be fixed by the end of today.)

I encourage you to leave a comment on the e-zine’s website. Even to say how you hate my poems and why. 🙂 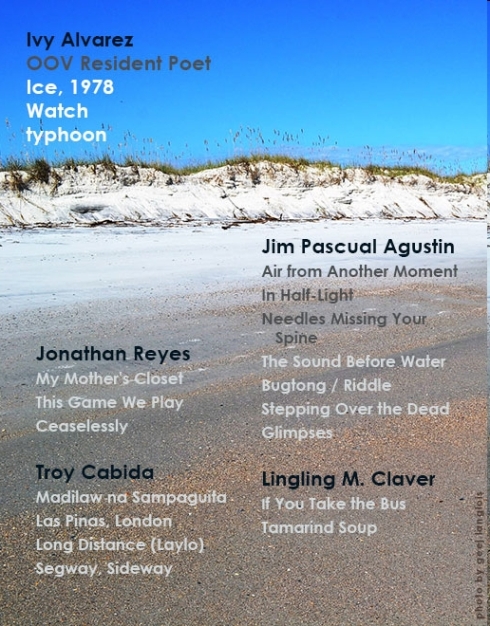 Jim Pascual Agustin writes and translates poetry. Sometimes he tries his hand at essays and stories. In 2011 the University of Santo Tomas Publishing House in Manila released BAHA-BAHAGDANG KARUPUKAN (poems in Filipino) and ALIEN TO ANY SKIN (poems in English). The same publisher released his most recent poetry collections SOUND BEFORE WATER and KALMOT NG PUSA SA TAGILIRAN. In 2015 a new poetry collection in English, A THOUSAND EYES was released. His first collection of short stories in Filipino, SANGA SA BASANG LUPA, was released in 2016. UK publisher The Onslaught Press launches his latest poetry collection, WINGS OF SMOKE, worldwide in February 2017. END_OF_DOCUMENT_TOKEN_TO_BE_REPLACED
This entry was posted on Wednesday, March 5th, 2014 at 12:27 and tagged with Alien to Any Skin, Baha-bahagdang Karupukan, Filipino poetry, Jim Pascual Agustin, Philippines, poetry, South Africa, UST Publishing House and posted in Uncategorized. You can follow any responses to this entry through the RSS 2.0 feed.
« Cover for VERSES TYPHOON YOLANDA
Ukraine and the Holy Triumvirate »