The following post may be upsetting. I hope it is.

I found a photo off Facebook with the following text:

In this photo, a female trophy hunter sits smirking on top of the giraffe she blasted to death with a rifle as it ate from a tree.

With these kinds of “hunts,” wealthy individuals are usually driven to the spot by guides who know where the animals are. The clients then shoot and kill the animals, often while sitting in the Land Rover that brought them.

Even more unconscionable, some safaris are “canned hunts,” in which captive animals raised this purpose, are placed inside a fenced-in enclosure for the “hunter” to shoot.

Here’s the hunting company’s description of this event:

“We took Shelley out this morning with the thoughts of maybe getting a giraffe. We found this big bull feeding in the trees, and Shelley put 2 good shots in him before he went down. Big mature bull. We have it all here, and we want to share it with YOU”.

If you’d like to share your thoughts with the company that runs these “hunts” for a select and wealthy clientele (other clients include Ted Nugent and family) you can reach them via their website here: http://www.allhunts.com/Limpopo_Dangerous_Game.php

Here is the photo:

In response to the sadness evident in Shelley’s eyes, I wrote to her:

Dear Shelley, I forgive you. You must have been very hungry and cold. Please send me all the photos your admiring friends will take as you take huge bites of that animal. I would like to know if you enjoyed every piece of it, including its tail and ass. Please could you also tell us who your friends are. There are more animals in need of being shot by your kind. Will you also teach them the correct way of firing a gun? The tiny hole where the bullet flies out of should be pointed at each shooter’s head. Teamwork and perfect choreography is needed. God loves you.

Then I thought maybe I should find out if she has friends with the same tragic look. So I went to the website of the company that helped her deal with the sadness. And this is what I found: 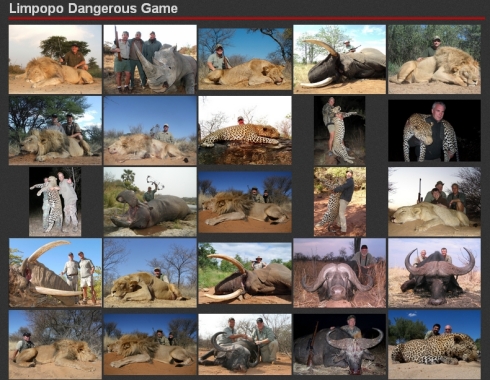 Want to help them all? Please click the above photo and it should take you to the website of the company where you can express what you feel about the group hugs they managed to capture on camera. Some of them are even on video.

Jim Pascual Agustin writes and translates poetry. Sometimes he tries his hand at essays and stories. In 2011 the University of Santo Tomas Publishing House in Manila released BAHA-BAHAGDANG KARUPUKAN (poems in Filipino) and ALIEN TO ANY SKIN (poems in English). The same publisher released his most recent poetry collections SOUND BEFORE WATER and KALMOT NG PUSA SA TAGILIRAN. In 2015 a new poetry collection in English, A THOUSAND EYES was released. His first collection of short stories in Filipino, SANGA SA BASANG LUPA, was released in 2016. UK publisher The Onslaught Press launches his latest poetry collection, WINGS OF SMOKE, worldwide in February 2017. END_OF_DOCUMENT_TOKEN_TO_BE_REPLACED
This entry was posted on Thursday, March 27th, 2014 at 19:33 and tagged with Animal Shame, Limpopo Dangerous Game, Shelley, World Hunting Adventures and posted in Africa, Capitalism's greed, Creatures, environment, Influences. You can follow any responses to this entry through the RSS 2.0 feed.
« To Remember
NEW ANTHOLOGY OUT! »