I wonder if the novelty of digital photo frames will pass. Sure, it’s one way of displaying the countless photos we end up taking every day because of the ease of technology. At the same time, though, we move one more step away from what is tangible. Fingertips were never designed to only touch glass… and soon air.

I have a very personal poem that has found a home in Cha: an Asian Literary Journal. Thank you to Jenna Le and Tammy Ho.

Please visit the site and leave a comment. Any show of support goes a long way to those who make room for others to share their work. HERE is the link to my poem, “Photographs Under Plastic Sheets.”

I hope to have it one day as part of my manuscript in progress called HOW TO MAKE A SALAGUBANG HELICOPTER. 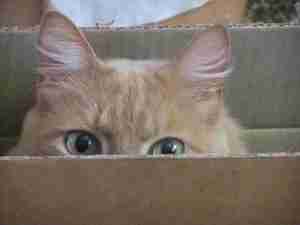 What’s the cat photo for? Nothing. Just to “cat”ch your attention. 😛

Jim Pascual Agustin writes and translates poetry. Sometimes he tries his hand at essays and stories. In 2011 the University of Santo Tomas Publishing House in Manila released BAHA-BAHAGDANG KARUPUKAN (poems in Filipino) and ALIEN TO ANY SKIN (poems in English). The same publisher released his most recent poetry collections SOUND BEFORE WATER and KALMOT NG PUSA SA TAGILIRAN. In 2015 a new poetry collection in English, A THOUSAND EYES was released. His first collection of short stories in Filipino, SANGA SA BASANG LUPA, was released in 2016. UK publisher The Onslaught Press launches his latest poetry collection, WINGS OF SMOKE, worldwide in February 2017. END_OF_DOCUMENT_TOKEN_TO_BE_REPLACED
This entry was posted on Monday, June 29th, 2015 at 10:01 and tagged with Cha: an Asian Literary Journal, How to Make a Salagubang Helicopter, Jenna Le, Jim Pascual Agustin, Tammy Ho and posted in How to Make a Salagubang Helicopter. You can follow any responses to this entry through the RSS 2.0 feed.
« Leaving the Land: Geometry and Fear (poem from Alien to Any Skin) and some musings
Ways of Hurting: Greece, “the creditors” and some robbers »

4 responses to “A poem appears on Cha: an Asian literary journal June 2015 issue”